(San Francisco) This November, the Coalition of Organizations of Jews from Arab and Islamic Countries in Israel, will award Gina Bublil-Waldman, with an “Ot Kavod” award, or “Badge of Honor” for her contributions toward the Middle Eastern Jewish-Refugee Justice Movement. The award was initiated in 2016 to honor individuals whose work achieves the promotion of the rights, heritage and history of former Jewish refugees from the Middle East and North Africa. Last year the award was given to Israeli Minister of Social Equality, Gila Gamliel and Professor Uzi Arad, former Head of the National Security Headquarters for the Prime Minister and Founding Director of the Institute for Policy and Strategy at the Interdisciplinary Center Herzliya (IDC).

Levana Zamir, President of the Coalition of Organizations of Jews from Arab and Islamic Countries in Israel remarked that, “The board members of the coalition, decided to give our prestigious “Ot Kavod” award to Gina Bublil-Waldman, for she is currently the greatest of our diaspora advocates fighting for the acknowledgement of the rights, history and heritage Jews from Arab countries. She is being given the award for her energetic work to share and engage our heritage and history with young generations.

Gina will accept the award at a ceremony at the Cinemateque in Tel Aviv on Thursday, November 9th. Israeli Member of Knesset, Nissim Zeev will also be honored for sponsoring legislation for Jewish refugees rights in Israel. Levana Zamir, President of the Coalition of Organizations of Jews from Arab Countries will present the award. The evening will also include additional remarks by Eyal Ginio, Chair of the Ben-Zvi Institute for the Study of Jewish Communities in the East and Professor at Hebrew University of Jerusalem, and Minister Gila Gamliel. The evening will conclude with the premier of five short documentaries on Jews from Arab countries. 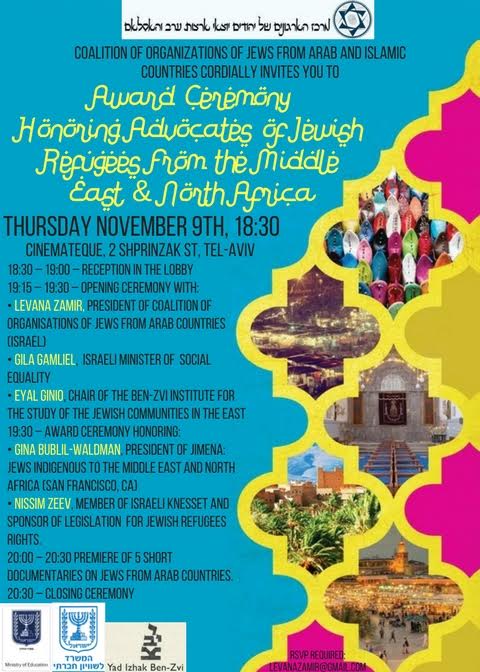