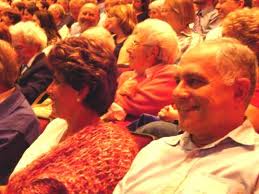 Joe Pessah was born in Cairo, at a time when he and his family were among the 80,000 Jews living in Egypt and thriving in their Jewish community.

In the 1950s and 1960s, however, life for Egyptian Jews became increasingly difficult when a poorly written law was enacted declaring Zionism a crime. In 1967 when the Arab states lost the Six-Day War against Israel, many Arab countries took their rage out on their local Jewish communities. In Egypt, Jewish men between the ages of 16 and 55 were arrested–Joe being one of them.

For the first 6 months of his imprisonment, Joe had no contact with his family or fiancé. After six months his fiancé was only allowed to visit him for five minutes once a month. One day, Joe’s fiancé surprised him with a rabbi and two wedding bands.  They were married in prison, yet were not even able to hold each other’s hands.

For three years, Joe was beaten and tortured in prison. In 1970, he and the other prisoners were released due to pressure from outside organizations. After they were released, the Egyptian government revoked their citizenship and deported them. Joe left Egypt for Paris with his wife and later moved to the San Francisco Bay Area.

Today, Joe is a marketing applications manager for a tech company, and also serves as acting “Rav” for the largest Kararite Jewish Community in North America: Congregation B’nai Israel in Daly City, California.